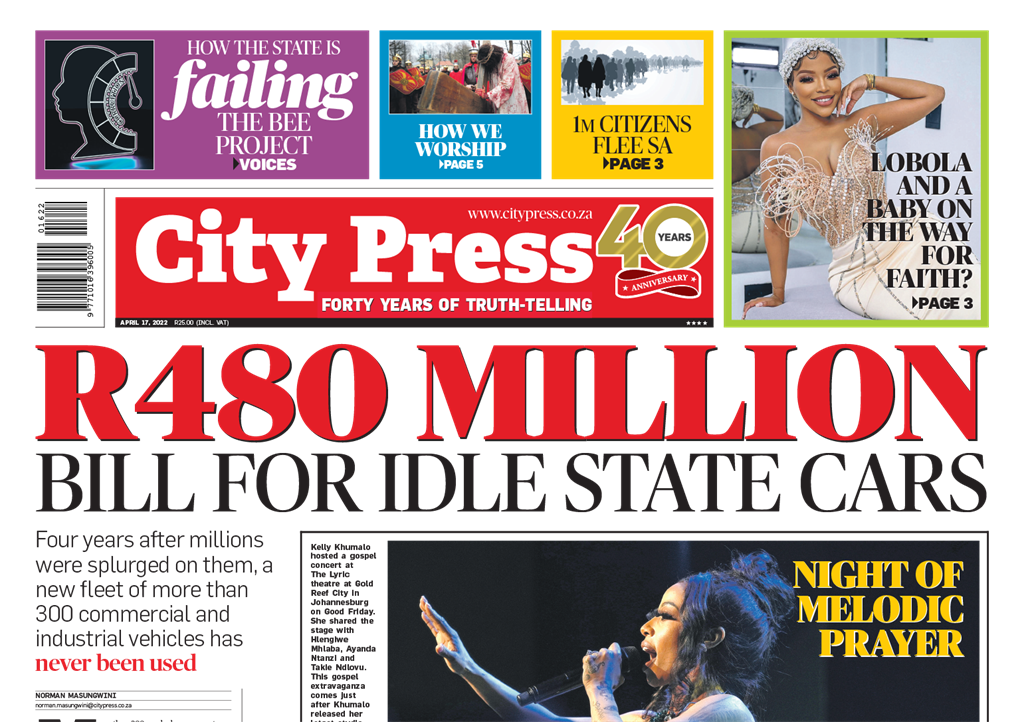 More than 300 marked government vehicles have been collecting a thick layer of dust after being bought by the Rustenburg Local Municipality in the North West four years ago.

“Clean water is now the biggest crisis facing everyone,” says Dr Gideon Groenewald, chief geologist at Gift of the Givers.

“People are coming in on their boats. They mainly distribute water. You have to remember, all those sewerage pipes are down, sewage is flowing everywhere. There’s a great danger of diseases such as cholera.”

Lobola and a baby on the way for Faith?

Barely a week after pictures of their over-the-top lobola and traditional wedding celebrations surfaced online, it has now emerged that popular social influencer and reality TV star Faith Nketsi and her businessperson husband Nzuzo Njilo are expecting their first child.

Last Saturday, the pair had a private groom welcoming ceremony – mahlabisa – at the Suitability Garden Venue in De Deur, Gauteng.

Just after Seluleko Zungu (34) rescued his 99-year-old blind grandmother from their home and took her to their neighbours, he watched in horror as his neighbour’s house in Inanda township in Durban began to shift from its foundation.

How eThekwini conference was rescued

Kylle Schwegman, who was graduating with a PhD in nature conservation, was supposed to have been the last student to be capped at the George campus of Nelson Mandela University last Friday, and then the graduation season at the campus, which is in the Western Cape, would have been concluded. Instead, the normal graduation protocol was broken to allow an undergraduate student, Entle Saba, to cross the stage after the red gowns. Saba was more than an hour late for the graduation ceremony.

‘Mama, I have been expelled from Rhodes University’

Yolanda Dyantyi was meant to have graduated in 2018, which would have made her the first person in her immediate family to obtain a university degree. But she did not.

Instead, during graduation season at Rhodes University in Makhanda, Eastern Cape, she was scrambling for money to buy data so she could browse Facebook and Twitter to watch her peers, friends and classmates graduate.

An aspiring Durban-based television content creator has become the latest creative to accuse popular television channel Moja Love of using a concept without compensating the originator.

Commercial cleaning company Afri-Services has added to the EFF’s legal woes by slapping the party with a lawsuit of more than R10 million for alleged racist statements published by its labour desk on social media, as well as for allegedly defying an earlier court order to render an apology.

Troubled self-proclaimed youngest millionaire Sandile Shezi’s legal woes are mounting after he was arrested last week for failing to pay back another alleged victim’s money.

Late Bafana Bafana and Orlando Pirates captain Senzo Meyiwa’s older brother, Sifiso, says he is being intimidated by the police, who are investigating him for alleged corruption. He revealed this as the trial of five men accused of murdering the soccer star in 2014 got under way in the Pretoria High Court this week.

ANC leadership positions are up for grabs in the Free State, with lobby groups starting to put leaders forward for the chairperson position. The province intends to hold its conference either in June or July, but has not yet convened any of its regional conferences.

No one could have predicted the “rain bomb” that fell over KwaZulu-Natal in the past week, but better planning could have limited the subsequent damage.

Economic, social, political and environmental concerns may have led to nearly 1 million South Africans leaving the country between 2015 and 2020.

Move over Debonairs, there is a new pizza guy in town. Themba Limekhay, of the Vaal township in Orange Farm, south of Johannesburg, is selling delicious home-made pizzas from his shack – and his customers are loving every bite.

The SA Communist Party in Limpopo is disappointed with its deputy chairperson, Phophi Ramathuba, for cosying up to the so-called VBS faction of the ANC, which is led by Premier Stanley Mathabatha.

The place from where Jesus rose

Pressed against a wall in a back corridor of Jerusalem’s Church of the Holy Sepulchre, a stone slab bore testimony only to the graffiti etched on it by multitudes of pilgrims through the ages.

In 2012, the North West, under former premier Thandi Modise, rushed to approve a R5.8 million loan from the public purse to bail out a man who was unable to pay his debt for the operation of the internationally acclaimed Bop Recording Studios Resorts.