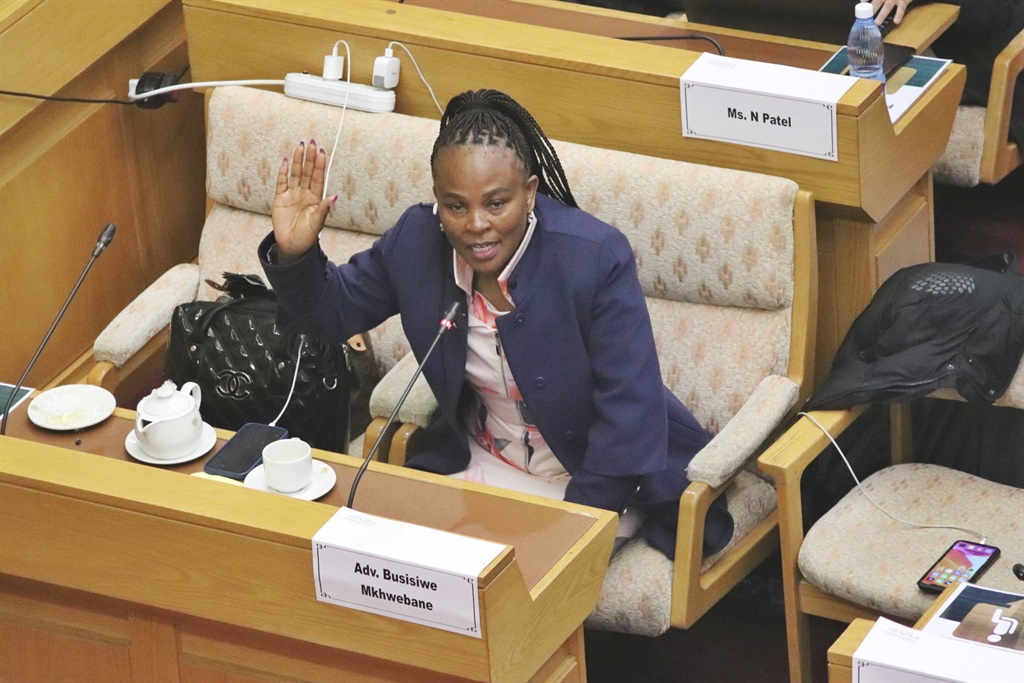 In 2017, Mkhwebane requested a meeting with the State Security Agency (SSA) after the provisional report had been finalised. Photo: Jan Gerber/News24
Suspended Public Protector Busisiwe Mkhwebane allegedly instructed investigators in the Vrede Dairy Farm report that they should not make adverse findings against politicians, including former Free State premier and suspended ANC secretary-general Ace Magashule.This was revealed by former senior investigator in the Public Protector’s office Tebogo Kekana, who was the lead investigator in that matter.

Kekana is giving testimony in the Parliament impeachment inquiry into the fitness of Mkhwebane to hold office. This is the second week of the inquiry.

The Vrede dairy project was meant to empower local black farmers, but only a few members of the community were employed as manual workers.

Instead, Mosebenzi Zwane’s department of agriculture, land reform and rural development awarded a tender to Gupta-linked company Estina without following due process, despite the company having no experience in farming.

“I was informed by [the executive manager for provincial investigations and integration unit Reginald] Ndou that Advocate Mkhwebane had instructed him not to make any findings in the report against any politician.” Kekana said:

We were accordingly forced to remove any adverse findings contained in the report against any politician, including Ace Magashule, the premier of the Free State at the time, and Mosebenzi Zwane, who was the MEC for the Free State department of agriculture, land reform and rural development at the time.

In the final state capture report, Chief Justice Raymond Zondo recommended that law-enforcement agencies investigate Magashule and Zwane to establish whether they contravened any law in the roles they played in the Vrede dairy project.

Kekana also said that the investigation team in the Vrede matter had been called into a meeting with Mkhwebane in February 2018 when she had instructed that they “remove material information” from the report.

“[Ntsumbenzeni] Nemasisi warned Advocate Mkhwebane about removing vital information in the report as it could lead to a review. Mkhwebane indicated that she did not care whether the report was reviewed or not.”

Kekana – who was dismissed by the Public Protector’s office – made a protected disclosure in 2019 to the Speaker of Parliament and the Presidency concerning “irregular and improper” conduct by Mkhwebane.

READ: ‘You were not the main target of the rogue unit probe,’ Mpofu tells ex-Sars executive

“In the course of my employment within the Office of the Public Protector, I witnessed and acquired knowledge of several troubling instances of improper conduct by Advocate Mkhwebane herself,” wrote Kekane in the disclosure.

He also mentioned the CIEX report where he alleged Mkhwebane had acted irregularly.

In the Bankrop – CIEX report, Mkhwebane found that the SA Reserve Bank’s R1.125bn bailout for Bankorp between 1985 and 1995 was unlawful. The report further indicated that Absa should pay back the money, having bought Bankorp in 1992.

As part of the investigation, Kekana said former Public Protector Thuli Madonsela had interviewed the former head of the SA National Intelligence Agency, Billy Masetlha, but the transcript of the interview was lost.

In 2017, Mkhwebane requested a meeting with the State Security Agency (SSA) after the provisional report had been finalised.

Kekana attended a meeting with Mkhwebane and met with James Ramabulane, Arthur Fraser (former director-general of the SSA), and then minister of state security David Mahlobo to get the submission from the SSA regarding the events surrounding the investigation.

“On the day of the meeting, I was informed that Advocate Mkhwebane was having a discussion with Minister Mahlobo before the meeting. I was not a party to the discussion.” Kekana said:

I found it odd that Advocate Mkhwebane would hold a discussion by herself with none of the attendees of an interview without anyone present.

He explained it was “odd” because they did not have a one-on-one during an investigative meeting.

At the official meeting, Kekana said Mkhwebane instructed him not to take notes or record the interview as it was a standard procedure. He said he was “extremely shocked” by the instruction.

While drafting the final report, Mkhwebane allegedly told Kekana to include a recommendation that would say the Constitution has to be amended to cater to the nationalisation of the Reserve Bank.

He again attended a meeting with Mkhwebane and representatives from the SSA, including Mai Moodley. Mkhwebane introduced Moodley as an economist. Moodley provided a recommendation to be added in the final report about the amendment of the Constitution related to the Reserve Bank.

“Accordingly, the remedial action contained in the final CIEX investigation report did not come from the Office of the Public Protector, but rather from the SSA.”

The CIEX report was taken on judicial review, and the Pretoria High Court set it aside.